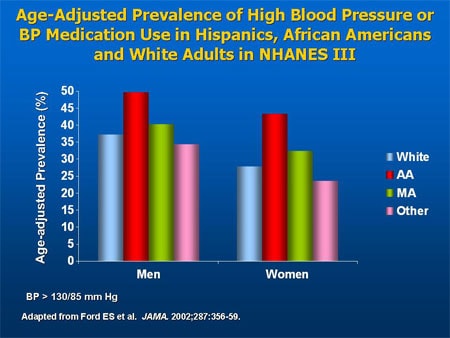 High blood pressure or hypertension is more common in the African American society than one of a different race. It is also seen that African Americans get high blood pressure and related health problems at an earlier age than other races. Some of the health related problems are stroke, heart disease, dementia, kidney disease, and blindness. (www.webmd.com) This may be because of genetic factors like sensitivity to salt intake and how African American respond to some drugs due to genetic make-up. The environment  of living in the United States also plays a part, if has been found that those still practicing the traditional lifestyle have a lower percentage of having hypertension than those accustomed to the United States lifestyle. (www.webmd.com) Looking at the graph above we see that there is a very clear difference in ethnicity but there is also a big difference in gender as well. More than 40% of the total African American population in the United States has high blood pressure and there are very few symptoms. So blood pressure should be frequently taken to take notice of it. (www.heart.org)

In class an example of a health disparity in the African American population was sickle cell anemia. This was due to a genetic mutation to protect against malaria. If a child receives the mutated strand from both the mother and the father then are diagnose with sickle cell anemia. The red blood cells harden and it clots in the veins resulting in sharp pain. This is most commonly found in African Americans for that reason. The mutated strand is found in African countries because that is where a large amount of mosquitoes are that carry the malaria virus. It is more likely that it is the environment that plays a role in health verses race. It may seem like it is race that plays a role but that may be because in an area there is a predominate race there so then the illness is identified with them.