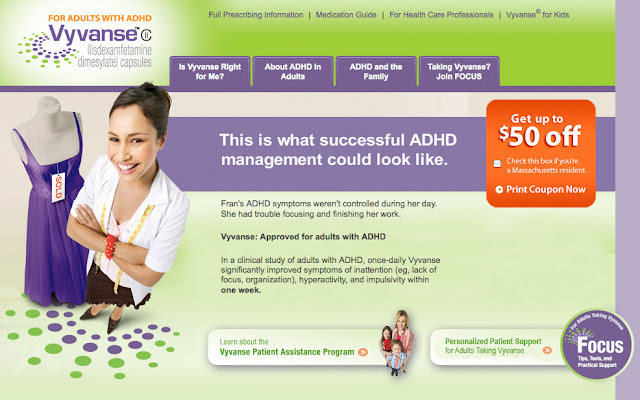 In American society there appears to be a pill for everything.  My mother is in remission from cancer, a diabetic, and has heart disease.  The amount of medicine she takes is absurd, but it is not far from normal.  It seems like in our high-paced, stressful society the “magic” a pill offers is preferable to something that takes effort and time away from maintaining high productivity – such as a lifestyle change (regular exercise, cooking healthy meals) which greatly reduce the risk of chronic disorders such as diabetes and heart disease.  Americans are generally willing to sacrifice their health for the sake of family or success.  Stimulants are the drug type of choice for Americans, and it’s not just caffeine or nicotine that the work force embraces.

ADHD is an illness with symptoms that we all at some point in our lives feel (who doesn’t get bored in class?), sometimes every day.  It is a dangerous diagnosis because the primary treatment used is medicine (who has time for therapy!) – namely potent stimulants such as amphetamine and its derivatives.

Vyvanse is an amphetamine pro-drug (synthesized in such a way as to “limit” abuse and increase the longevity of its effects) commonly prescribed for ADHD.  In this advertisement for Vyvanse, we see a young fashion designer who is apparently “successful” because of using Vyvanse to treat her ADHD.  The advertisement description of how her work was suffering is far from diagnostic (“trouble focusing and finishing her work”) with no mention of the actual criteria needed to determine if one has adult ADHD.  This advertisement is essentially telling an individual what to tell a physician in order to get a prescription for Vyvanse.  An uncited study is mentioned in which the words “one week” are bolded which could appeal to someone who needs an immediate boost of productivity (ie a deadline is coming up).