So the purpose of Stonehenge was…?

Contrary to my scientific background and slightly above average common sense, I adore crazy outlandish conspiracy theories – because sometimes fiction is more interesting than real life. I decided to dedicate my blog this week to the some of my favorite Stonehenge theories I can find, because let’s face it: Stonehenge being a sacred place for astronomical, burial and a place of pilgrimage is a little boring when you have aliens! 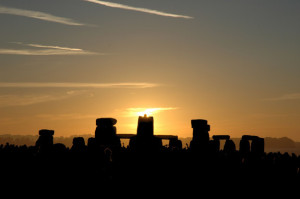 The first theory that sparked the interest of many is that Stonehenge has an astronomical significance! Back in the 1700’s, Dr. William Stukeley (of the Society of Antiquaries of London) was the first to put two and two together – the stones of Stonehenge line up perfectly with the winter and summer solstices. But that’s boring because it’s true. I fancy his theory dealing with the Druids. Druid beliefs are hard to pin-point. They are a group of people who don’t have any dogma or clear-cut set of beliefs; within Druidism, you can belief in one god or many. Anyways, William Stukeley echoed John Aubrey’s beliefs that Stonehenge was actually a temple used by ancient Druid’s celebrating the summer solstice. There is a long history of Druidism and the Stonehenge (some involving the police!), but now I’m getting a little off topic.  Thousand of people flock to Stonehenge to celebrate the solstices now-a-days!

A heartwarming theory is that Stonehenge marked the “unification of Britain.” The theory involves people came together to working on pottery and other things. Mike Parker Pearson from University of Sheffield stated that building Stonehenge must have needed thousands of labors to move the stones “requiring everyone literally to pull together, would have been an act of unification.”   Outside the crazy conspiracy theories with little merit, this is my favorite theory. I enjoy imagining people from present England, Wales and all over the United Kingdom working together. It’s a nice thought.

Another theory heart warming theory is that Stonehenge was believed to be a place of healing.  Excavation of the site has shown that most of the bones of the individual’s buried there had the marks of illness.  That could be more of a did the chicken or the egg come first – because there is much physical and scientific evidence that Stonehenge is a burial site.  Now did people die and buried at Stonehenge because they were ill or were the people, brought to Stonehenge in hopes that they would be healed, died and were buried there because it was the most convenient? 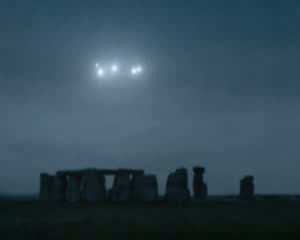 Aliens seem to always be behind any large ancient archaeology site.  As much as I am amused by this theory, it’s slightly insulting to earth’s ancestors. These crazy theories only exist because man could not have simply made these structures – quite the opposite explanation that Pearson gave with this unification theory. Anyways, back to the Aliens.  The theory involves everything from lunar temples made for worship to Alien landing pad.

I really enjoyed looking into Stonehenge’s past – before this class I was like, it’s bunch of heavy rocks guys, no big deal.  After reading up on the summer and winter solstice celebrations, I think it would be pretty cool to visit and take pictures.  I’ll add that one to my list, right underneath not getting abducted by aliens!