The Ritual Landscape of Stonehenge

Up until we talked about it in class, I had never known that Stonehenge was part of a larger ritual landscape. I thought it was a stand alone structure. I was shocked to learn that there were other smaller versions of henges or that people were buried in and around Stonehenge. I had never really known what the purpose of Stonehenge was or how it came to be. I thought it was fascinating that it was more of a “Land of the Dead” than I realized.

One thing of the structures that stood out to me was the Avebury Henge. In researching it more, I found a few things surprising about it. First of all, it’s much larger than I had originally realized – consisting of three stone circles and reaches 460 yards across. It is also surrounded by a ditch and embankment, just like Stonehenge. Just in the outer circle of the henge were 98 sarsen stones, with many more making up the inner two rings. Similar to Stonehenge, it is believed that the stones were chosen for their acoustic properties for any sound within the innermost ring echoes throughout. Leading up to the monument as well is an avenue marked with more standing stones.

Now the question of what was the Avebury Henge made for is, of course, prominent. There are many theories on the reason for its existence, though the true meaning for it has not been, and probably never will be, discovered. One popular view is that is was used for rituals of the local people, in particular to stave off bad weather, disease, and famine. Another theory is that the rings represent the axis mundi or the center of the world. Another theory centers on the stones themselves, which were not dressed in any way, but take the form of either tall and thin or short and wide. Researchers have theorized that the tall stones were picked to represent men and the shorter stones to represent women. 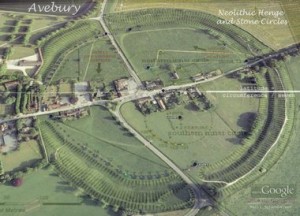 2 thoughts on “The Ritual Landscape of Stonehenge”