As a new mother it is already hard enough to maybe fathom that you have a life growing inside of you and choosing how you want to birth it you have to factor in cost, safety, efficiency. In America from not only readings but my own observation of people that are friends and family, I would definitely say that most births here in America are medicalized.  More than often  women will give birth under the direct care of the hospital. Not only because of maybe the safety reasons involved, but the direct care,  the access to medicine, and updated technology the hospital provides. Birth differs country to country and women to women.

In the Netherlands according to the (de Jonge A 2009) article shows that about 60.7% of women plan to give birth at home and most of these women were 25 and older and previously given birth to two or more children. Only 30.8% intended to give birth in the hospital. Yet only out of 60% about 30% of those mothers who intended to give birth did it at home and it is unclear to determine whether or not it is safe to give birth at home. Another study conducted in the Netherlands about the perinatal morality rate during the first 24 hours of delivery and the first week after delivery, researchers discovered there was no significant difference between women who chose to give birth at home and those who wanted to have a medicalized birth.  “It is safe to conclude that women can safely choose where they want to give birth.”(de Jonge A 2009) This provides a comforting and more of a warming environment for the women giving birth a home instead of the hospital.

The inuit culture child birth, according to, ” The Inuit Way” states , ” traditionally  the mother is often assisted in giving birth by an older women experienced in childbirth” also known as midwifery . Although it is starting to become more modernized and more women want to give birth through medicalization, they are trying to keep the tradition alive. “there is a strong support among inuit women for the return of traditional midwifery practices”.  The inuit midwives, student midwives, and maternity workers hold special positions, they have grown up in the community and know the fears and frustrations of the women they serve within their community.( Daviss) This birth method in this culture promotes a closer bond within  the women in the tribe, as well as a bond with the mother and child in the comforts of their own home.

In Vietnam The Hmong culture  prefers  home birth over any other method. Around 70% choose home birth. Even though it is traditional and highly preferred It is very dangerous for home birth for these women because ethnic women are 50 % more likely to die especially in the rural mountains. ( Ahlmark, Nick, Nicole).

In comparison to America overall I noticed not only the absence of men not present during childbirth within these other cultures. Also other countries home births are more traditional and important aspects of birth as opposed to America.

de Jonge A, van der Goes B, Ravelli A, Amelink-Verburg M, Mol B, Nijhuis J, Gravenhorst J, Buitendijk S.: “New figures from the Netherlands on the safety of home births”

Ahlmark, Nick and Nicole Precel: “The Mountain Midwives of Vietnam”

Daviss, Betty-Anne: “Heeding Warnings from the Canary, the Whale, and the Inuit” 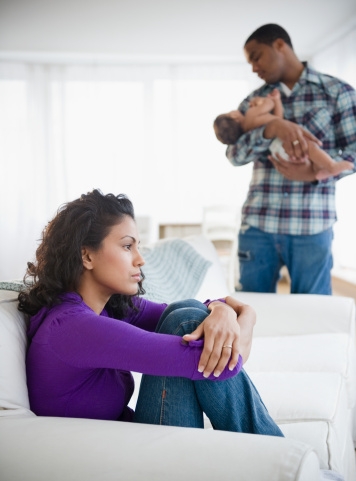 Although there are many ways to interpret what is going on this photo, the first thing I noticed is the distinct separation that has been created between the mother and her child. Based on her body language, it is easy to conclude that she could very well be one of the thousands of women suffering from postpartum depression. Postpartum depression refers to the severe and long lasting sadness that some new mothers face following giving birth. This image reinforces the dominant idea that  women are highly emotional individuals in comparison to their male counterparts; the mother is fighting an internal  battle as the father remains focused on their child.  In addition, this image illustrates the less glamorous and joyous side of pregnancy by showcasing a negative aspect of the childbirth process.