Movie Review: The Business of Being Born 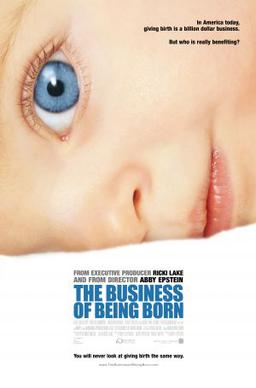 For my movie review I decided to watch the documentary The Business of Being Born. The film examines the culture of birth in the United States and how it has moved away from home births with a midwife to being about going to a sterile hospital with access to drugs and doctors. In the film the viewer sees the stories of various women who have chosen to have home births. The film also follows the story of director Abbey Epstein, who became pregnant while the film was being made. Throughout the course of the film various health experts are interviewed as well as obgyns to illustrate the cultural attitudes that are held surrounding the concept of birth. Much of the film highlighted the stigma that has emerged about home births, and  how they are seen as less safe than a hospital birth. However, the film aims to shed light on the fact that home births actually tend to be safer for women who have normal pregnancies. Yet the culture in the U.S. treats women like they don’t know how to give birth, as if women haven’t been giving birth outside of hospitals for thousands of years. Ultimately the movie shows many examples and talks with many experts that speak of all of the benefits that home births can offer.

I think that this movie relates excellently to this course, because not only does it cover the medical aspect of birth, but it really focuses on the cultural aspects that have gotten us to where we are today. Medical anthropology is about looking not just at the medical practices, but at how we perceive them, and why they take place. The film makers did an excellent job of presenting statistics about hospital births, but also discussing how our culture developed the attitudes that it has about hospital births. For instance, instead of just saying that by 1950 less than 1% of women were giving birth at home or that in 2005 1 in 3 women were having cesarean sections (1) the filmmakers actually discussed what has happened in our cultures history to make this happen. From the film we learned that back in 1900 more than 95% of women gave  birth at home, but within 50 years that statistic dropped down to less than 1%. One of the reasons for this that the film discussed was that during first wave feminism women realized that they didn’t need to be in pain when they gave birth, because of new drugs that were coming out at the time. (1) However, this led to the “twilight sleep” era of the 1950’s and 1960’s where doctors would give women drugs that would help numb the pain and forget the pain of birth after the fact. However this drug had a tendency to make women act erratically and some women had to be strapped to hospital beds and left there for days at a time.  However, even with this knowledge drugs are still being pushed upon women in hospitals. One reason that the film cites is that hospitals have become a business, and the hospital isn’t making money if they aren’t cycling patients through. Many of the women interviewed in the film said that once their labors stretched past about 12 hours they felt as if they were being rushed through the process. (1) Women are then given Pitocin to speed along contractions, but that also increases pain, so they must be given an epidural. However, the epidural slows down the process, so that means another dose of Pitocin. Eventually this process causes the baby distress, which usually leads to an emergency c-section when the birth wouldn’t have called for that if the drugs hadn’t been introduced. (1) Many women who don’t even want drugs will find themselves being coerced because of the power dynamic that exists around our healthcare system. If a woman doesn’t want drugs but the doctor says she needs them, she often will feel like she needs to listen to the professional, when the professional in the hospital has been trained for abnormal births and rarely learns how to deliver a normal birth. (1) One quote from the film states “if you want a humanized birth get out of the hospital.” We have seen examples of how women can successfully give birth outside of a hospital in our class materials. In The Spirit Catches You and You Fall Down we read about how Lia’s mother gave birth to her children while standing up in her hut. She would stand there through the contractions with no pain medicine or doctors, until she would eventually reach down and catch her baby in her arms. (2) The video pointed out that other cultures (particularly ones with higher instances of home births) are better at birth with significantly lower instances of infant and mother mortality. In the case of Lia’s mother by standing up she was actually giving birth in a more natural way, the film brought up that laying down with one’s legs up the way we do in the United States is one of the worst ways to give birth because it shrinks the pelvis as opposed to opening it up. (1)

Midwives have been helping women give birth for hundreds of years successfully, but hospitals don’t like to lose the business. In the early 1900’s hospitals used smear tactics to try and convince people that midwives were dirty and dangerous to their children. (1) Like the Inuit women in northern Canada who are being forced to go to hospitals down in the south, flying hundreds of miles as opposed to using the midwives and staying in their own community. (3) Not only would this be hard for the Inuit women, but it is also expensive to go to the hospital to give birth. One midwife in the film said that a hospital will charge an average of $13,000 to deliver a child, but her services as a midwife are only about $4,000. (1)

I think this film would be excellent to show in class because we have learned a lot about women in other cultures giving birth and about midwives, but this film really illustrates how women in the US give birth and also shows that their are still midwives in our culture. It helps to show that it does exist in our culture, but it also shows how the things that we consider to be so normal like giving birth in a hospital can have ramifications. I also think it would be interesting to show this film in class because I think it shows the business side of the medical industry in our culture which is definitely a part of medical anthropology.

This film was very eye opening for me because in this class I’ve thought of the medicalization of birth for other cultures, but I hadn’t really thought of the history of how it happened in our own culture. I think this was a good film for me to watch since we did discuss this topic in our class but it gave me more of an in depth understanding of our own culture.