Probably my earliest memory of ever seeing the Sphinx comes the Disney movie Aladdin. During Aladdin and Jasmine’s magic carpet ride they fly past a man working on the Sphinx. The man become startled when he sees them waiving at him and accidentally chips off the nose. But what else is there to know about this structure other than it being a massive architectural feat of the ancient world. 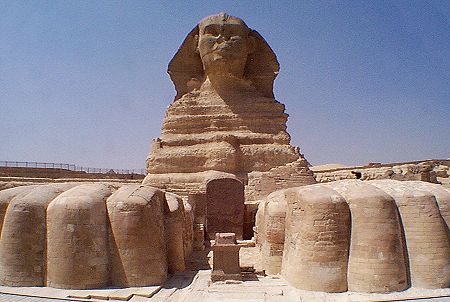 At a length of 236 feet, the Sphinx is the largest remaining structure of the ancient world. The head is human (thought to be the face of the Pharaoh Khafre) and the body of a lion and was built using natural bedrock and blocks of limestone. Why was it built? No one knows the real answer but it is thought that it may stand as a symbolic guard over the Giza plateau. The Sphinx faces the rising sun and was worshiped by some Egyptians as an aspect of the sun god. Egyptians would come to the small chapel in between the giant paws to honor the god.

As great as it would be, it was not Aladdin’s fault that the Sphinx no longer has a nose. There are many theories such as it being Napoleon’s fault or getting blown off by a lucky shot during target practice. However, the most accepted answer is that Sufis in the 8th century AD saw it as a blasphemous idol and removed the nose to deface it (haha get it. . . de”face”).

Some fun facts about the Sphinx:

The Sphinx was not an easy task to complete. Being that it is still standing relatively intact to this day there is no “wonder” that it is one of the Seven Wonders of the World.

The class challenges students to explore the origins and fluorescence of the rich cultures of Egypt, ranging from the earliest foundations of the Egyptian state in the 5th century B.C. to the splendors of Roman Egypt under the rule of Cleopatra. By exploring case studies that highlight the extraordinary archaeological heritage of ancient Egypt, the course focuses students’ attentions on key anthropological concepts, such as kinship, ritual, political economy, mortuary practices, and cultural contact. In addition, the class explores the foundations and development of Egyptian archaeology as a discipline, as well as the ways in with the interest and obsession with ancient Egypt has manifested in popular culture.