While I was aware that many events in the Bible take place in Egypt, it still gave me pause to think that individuals would deliberately go to or even through Egypt rather traveling straight to their destination or using it merely as a stopping place in a greater journey to, perhaps, Israel. As I was looking up more about the subject, I stumbled on a place named Abu Mena. 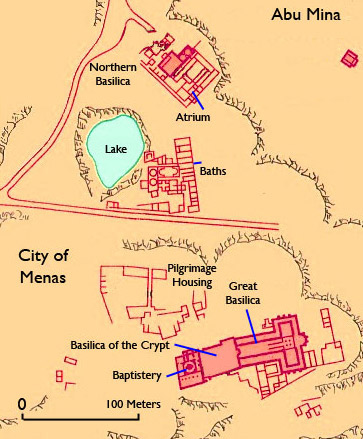 From the start Abu Mena was a holy city: it was built above and around the burial site of Saint Mena. Living in the third century AD as a soldier, after his army’s victory he would not kill any Christians even as he openly professed his own Christianity. During the fifth and sixth centuries, the city grew very fast as it increased in popularity as a religious pilgrimage site. There was the church, monasteries, basilicas and many other necessary buildings; there were even hostels for the pilgrims. The alleged tomb of Saint Mena lays beneath a church, a hypogeum denuded of its original artifacts. It has been argued that Abu Mena wasn’t the original settlement. Due to the discovery of other tombs around the area, some have proposed that there had been another settlement with the cult of Mena attaching itself there after its founding.

Pilgrims to Abu Mena were able to buy clay flasks, also called ampullae. They likely were used to contain oil, believed to have become holy because it was kept close to the tomb of Saint Mena, and pilgrims were then able to take back home. These have been found in a number of places outside of the holy city, a testament to the popularity of the martyr.

An ampulla upon which Saint Mena  is engraved (source)

It was destroyed in the seventh century, was somewhat rebuilt later, but Abu Mena was ultimately abandoned around the tenth or eleventh century. Today, the city is in peril due to the increased height of the water table, which causes  flooding and may lead the buildings to collapse.