Most people are likely unfamiliar with this Egyptian royal, but nearly everyone with a television knows the name of her sister: Cleopatra, the last pharaoh of Egypt. Arsinoe did get some international attention a few years ago however, when archaeologist Hilke Thur announced that she’d discovered both Arsinoe’s skeletal remains in Turkey. This astounding claim made headlines, and it even spawned a BBC documentary called Cleopatra: Portrait of a Killer.

Arsinoe was born to Ptolemy XII somewhere around 68/67 BC. The death of her father left her older sister Cleopatra and her brother Ptolemy XIII rulers of Egypt, but Cleopatra was removed from power by her brother. She went to Alexandria where she met Julius Caesar in 48 BC, who would aid her in her quest to regain power. Arsinoe, along with her mentor Ganymedes, declared herself pharaoh after aligning herself with the Egyptian army. While Arsinoe at first was able to hold her ground against the Romans, she was ultimately defeated after Roman reinforcements were sent in.

After her defeat, Arsinoe was spared the traditional murder of prisoners of triumphs and was given sanctuary at the Temple of Artemis in Ephesus. Arsinoe and Cleopatra kept a wary eye on one another; the latter considered her sister a threat to her power, of which Arsinoe was very much aware. Cleopatra ended this pseudo truce: In 41 BC, Arsinoe was murdered on the steps of the temple on the orders of Mark Antony (who acted at the behest of Cleopatra).

In 1904, archaeologists began studying an octagonal structure imaginatively dubbed The Octagon. More than twenty years later, in 1926, they discovered a tomb inside of it containing bones. Because of its location in Ephesus, its approximate date (it was constructed sometime in the latter half of the first century BC) and its shape (allegedly reminiscent to that of the Lighthouse of Alexandria), Thur became convinced that this was the resting place of Arsinoe.

While the skull had been lost during World War II in Germany, Thur discovered the remaining bones still in the tomb. The remains were identified to be those of a young woman, perhaps as young as fifteen at the time of death. DNA analysis was also done on the bones, but unfortunately results were inconclusive due to their improper handling. Her teams also attempted to reconstruct the face of the woman, using photographs and measurements of the lost skull as the basis. From these results, Thur believes Arsinoe to be of African descent. 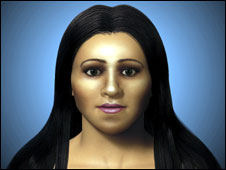 There are of course many who criticize the identification of this body.  Much of this is conjecture based on loosely related threads without enough evidence to back it. The remains seem too young for a woman who would have, if only for a short time, led a rebellion against her older sister and was captive in the Temple of Artemis for several years after her defeat.

Some critics are transparent in their greater offense at the suggestion that Arsinoe was of African descent rather than the fact it is such a huge claim with little evidence backing it. This is, however, a different topic that I have touched on before. It is worth noting that it is unknown if Cleopatra and Arsinoe were full-blooded sisters or half-sisters, leaving it possibly Arsinoe’s mother was African without tarnishing the cherished, white Greek Cleopatra.

Having watched the documentary Cleopatra: Portrait of a Killer when it first came out, I was impressed by it and didn’t question the validity of it. However, now that I am older, I am highly skeptical that these remains are those of Arsinoe; I am critical of Thur’s methods and analysis; and I doubt there will ever be a conclusive answer as to whose remains they are. I appreciate her desire to prove a person born in Africa might be African, but determining Arsinoe’s racial composition without even skull is laughable (even with a skull, results are not 100% accurate), though her method was certainly creative. I marvel at how this professional archaeologist can make such claims even when she can acknowledge the validity of some of her criticisms without counteracting it with any proof.