As odd as the title may seem, it feels all too appropriate as I sit here writing this. Right now being the first time I’ve been on the internet in almost two weeks, I realize that there really is no way to fully prepare for the lifestyle change that coming to this archaeology field school represented. I came in expecting to be roughing it in every sense of the word – camping in the middle of no-where with no electronics but digital watches, the situation I found however was quite different.

My tent (among almost 20 others) is set up in a ring surrounding a DNR service shed large enough for them to store various tractors, equipment, and picnic tables for us to use. There is electricity in the shed, enough to power lights, a refrigerator (for our breakfasts of cereal and milk), and an additional power strip for everyone to plug in their phones and other electronics. To my surprise there is not only phone service, but also internet (sometimes) made possible by Dr. Goldstein’s satellite router. It is truly an odd combination to be sitting in an open shed at the mercy of the wind and weather, while at the same time sitting around others who are playing games on their phones and laptops. 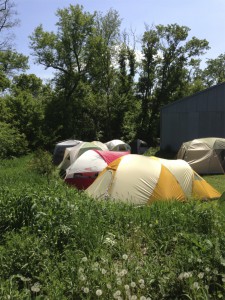 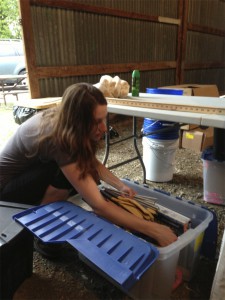 To look around from our excavation site one gets the impression of being deep in the wilderness, and yet after a long day of work we wander back to camp sweaty and covered in dirt, and then  drive five minutes into the town of Lake Mills to shower at the Drumlin Trails State Park trail head, and eat a nice meal at the restaurant ‘Carp’s Landing.’

Our water used to come from a large metal hand pump, but the hard taste of the water prompted us to bring our water coolers into town and fill them up from a hose at the trail head building. There is an odd mix of civilization and wilderness that has made for an interesting adjustment. In many ways it feels as though I’ve left the world I came from, the world of electronics, internet, and civilization, while in many other ways it feels as though I’ve never left.

It has definitely been an strange transition, but an interesting and worthwhile one nevertheless. We have many of the luxuries of civilization, but yet I feel that this lifestyle has left behind much of the stress of the civilized world. Me and many others have started to lose track of the days, with each one blending into next, but this a nice feeling, a tranquil feeling. It is a slower-paced lifestyle, one with hard work, as long days of digging in the hot sun can attest to, and great rewards, such as uncovering a strange relic of the past. Even looking back on my time here so far I am very glad I came, but have yet to fully decide which of the two worlds (if not both) that I find myself living in.