Aztalan State Park is a very interesting place. My field experience here began at the Gravel Knoll on the East side of the site, closest to the Crawfish River. My unit over there produced plenty of interesting finds, including points, flakes, pottery sherds, shell, and animal bone. The soil was also varied and everyday in the unit was something new and exciting! 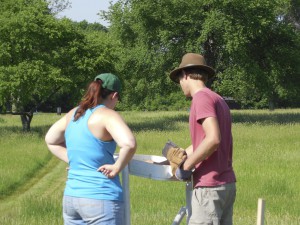 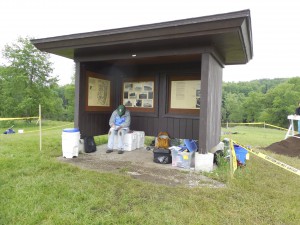 Just this last week I was moved to the West of Palisade excavations to open a unit that hopefully will bisect the western palisade wall and possibly a previous excavation done by Barrett. I must say that excavating in this area is not for the faint of heart. The soil is a hard packed clay that is very hard to dig through, my muscles, most days tell me I just need to stop. This unit also is very low in artifact and debris density. We may go hours before finding a tiny flake. That is not to say that we are not finding anything, in fact, we have found some rather large pottery sherds with a very course grit temper, and some Aztalan brick. The most exciting sherd, at least for me was a rolled handle pot top. There was this sense of awe as we pulled it out of the ground as it was something that I had never seen before. 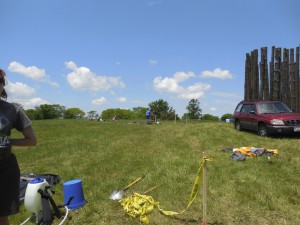 However, things besides artifacts are being found and provide information from this unit. We found a concentration of postmolds near the center of our 1×4 unit that coincides with a low trench in the ground. These were relatively hard to see as the soil discoloration was very subtle. The middle postmold that was excavated seemed to have been purposely filled as it contained a concentration of fired granite and some sherds. There was also a concentration of burned clay and charcoal in this unit, which is much smaller in diameter than the other postmolds. This particular feature may end up being a taproot of a tree that burned. This thought is due to the size of the featuire, the lack of artifacts within it, and also its location compared to the palisade. While I don’t find this to be as exciting as finding projectile points, it still provides priceless information that we will not be able to study again.