It’s hard to imagine that the field school is almost over, as it seems like I’ve finally just settled into the routine. My and Kyla’s excavation unit started with Kyla and I uprooting sod, and using the sharp edge of our spades to smash through the thick plastic mesh just beneath it. Today though, when the work day ended I realized that I could no longer just step out of our pit any more. It had been a stretch for a while, but now it seems the only way out is to get a running start (as much as one can in a 2×2 meter pit) and then jump for it. The one alternative is a method commonly referred to as the ‘beached whale method’ which involves the archaeologist jumping up the wall and landing with their stomach on the above ground, such that they are bent over the wall of the pit like an inverted ‘L’. They must then swing their feet upwards and roll over onto the grass. 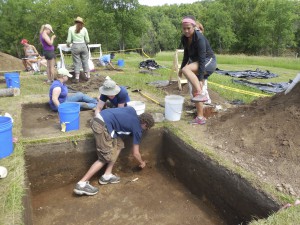 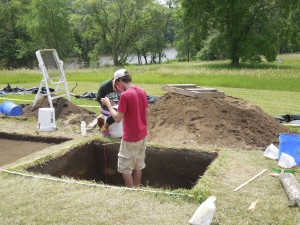 Needless to say, the ever decreasing ease of entering and exiting the pit has made me really start  to rethink what is a worthwhile reason to leave once I’m inside. Where as I once kept by backpack, water, and tools strewn randomly across the nearby grass, I now keep them within easy arms reach of the pit. Depth has also brought about the occasional disheartening realization that I have left something important behind, or just out of arms length, immediately after entering the pit.

Even the dynamic of such other important activities such as our 10:00am cookie break has shifted. Normally, cookies are set out in the central information kiosk (which our units roughly surround) around 10:00, as a good way to get us to mingle and look at what is going on in our pit neighbors’ units, yet today was the first day that they were brought over to us to let us avoid having to leave our squares.

‘Pit yoga’ as it has come to be called has also begun to change and adapt to the ever deepening excavation squares. The practice of pit yoga, first invented by Kyla Cools is the method of laying down and suspending one’s self over the side of the pit. When it comes time to trowel the floor of the unit, to ensure that the surface is even and at the proper elevation, as well as to make any variation in soil color or texture more visible, the excavators must ensure not to step on an area that they have previously troweled clean.

At higher levels, it was easy enough to simply kneel down and trowel the floor from the edge of the unit. As we have gotten deeper however, it became necessary to lay down and suspend one’s self over the edge of the pit, leaving one’s legs on the grass while they reached down into the unit to trowel the floor, and thus the practice of ‘pit yoga’ was born. More recently though, as our pit has passed the one meter mark for depth, it has become increasingly impossible to reach the bottom even while suspending ourselves over the pit. Thus pit yoga has become something more similar to ‘pit handstands.’ as we support ourselves with one hand while troweling with the other. 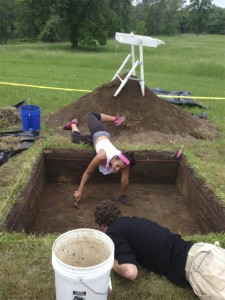 On the bright side of depth however is the fact that as we continue to go deeper and deeper, there is an ever-widening area of shade inside of our unit. The heat, especially towards the end of the day can be oppressive, yet as we’ve gotten deeper the walls of our unit have begun to provide us with a nice band of shade towards the end of the day that helps us to cool off. So while depth can be both a good and bad thing, it always has the tendency to make things a lot more interesting. 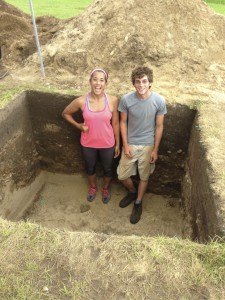