The day started as a chilly morning, with rain in the forecast. It had rained the night before and the grass had my shoes soaked within minutes. It wasn’t the type of day one typically wants to get up to start digging in wet grass and dirt at 7:30 in the morning, but we can’t always have good weather. So there was nothing to do but suck it up and pray that it didn’t rain too heavily. Little did I know that this gray day would turn out to be one of our most exciting ones yet!

The first three hours were pretty typical: dig, screen, sift through the objects left on the screen, repeat. But around 11, as Ian (my pit partner for this unit) and I were trading jobs I happened to look down on the ground and saw what I thought was a rock sticking out of the dirt. I mindlessly picked it up, ready to toss it into the grass, until I noticed that it ended in a point. Initially, my interest was piqued merely because I thought we might have a larger flake or perhaps our first scraper. But as I rubbed the dirt off it became evident that this was no flake, but an actual projectile point! Not only was this the first projectile point I had ever found, but this was the first one our entire group had found since our field school began! 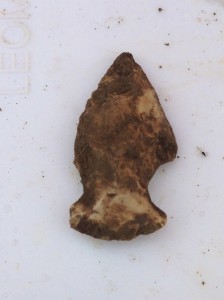 As the T.A.’s passed it around so everyone would have the chance to see it, my professor informed us that this point is called a durst point, which means it is either late archaic or early woodland. This type of point was most likely used on a spear, seeing as it would’ve been too heavy for an arrow. Regardless of what type of point it was, I was just glad to have picked the pit that contained it to dig in. We recorded where the point was found in our pit, traced it into our field notebooks, then bagged it and put it into the bag which contained the rest of the artifacts we had found within our pit (mostly small pieces of pottery, some animal bones, shell pieces, and a few flakes and pieces of cultural shatter).

This alone brightened my mood despite the continuation of gray skies and on and off rain. As the day progressed however, we had another surprise. We were finishing shovel scraping a final 2 centimeters from the level we were working on, and as I was screening through the dirt, my finger was poked by a rock that was in the middle of a ball of dirt. As I rubbed the dirt off the rock, I saw that I had another projectile point in my hand! 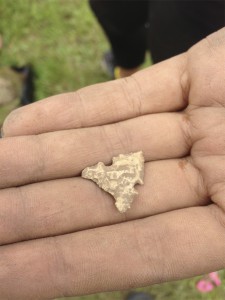 It’s hard to express how lucky I feel to not only find these things, but to be able to partake in a program that allows me to find these things. And even though sometimes it’s hard to get up at 6:30 in the morning so I can eat and prepare for the day before our physical labor begins at 7:30, a day like today reminds me why it’s all worth it.