My second excavation pit, Unit 6, is located on the Gravel Knoll. My pit partner, Ariel Williams, and I began excavating on Thursday, June 13th. In our first 10 cm level, we encountered gravel, broken shell, small animal bones, and small pottery sherds. Our second level was filled with many more diagnostic artifacts, including a Mississippian pottery rim sherd. We also discovered fire-cracked rock, flakes, grit tempered pottery sherds, and animal bones. Level three included a find that I found most exciting, a broken piece of a Mississippian blade!! The third level also revealed a dark circular soil stain extending out of the north wall. We excavated the soil stain separately, but only found three small chert flakes. 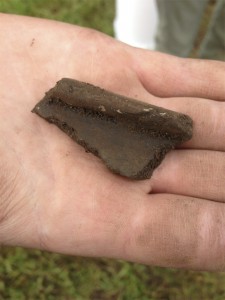 Level four revealed eight possible post molds. Six of the post molds were located in a semi-circle, extending out of the west wall. The post molds are still visible at the base of the fifth level. This could suggest that they were a part of a building structure on top of the gravel knoll. 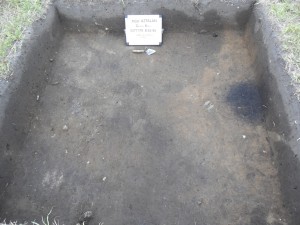 I am excited to see what the following levels will reveal in my unit in the final days of excavation!

The archaeological excavation in Aztalan State Park started off slowly. I was assigned to a unit west of the main palisade. My unit partner, Neal, and myself uncovered several flakes and pottery sherds. The soil that we excavated was very dense and mostly clay. It made it difficult to screen the soil to look for artifacts.

The main feature of our unit was a deep plow scar through the center of the unit. On one occasion, we had bail out the tarp covering our unit after a thunderstorm.

After Neal and I finished excavating our unit, we moved over to excavate on the other side of the park, the gravel knoll. In my new unit with Ariel, we have uncovered animal bone, shell, flakes, pottery sherds (both shell and grit tempered!), a beautiful shell tempered rim sherd, and a portion of a Mississippian blade! I am very excited to see what we uncover next!