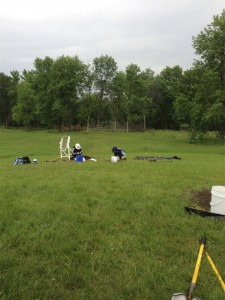 When my partner and I first noticed the dark gravel oval on our excavation unit floor, we were unsure what to make of it. We were told that it was a possible feature and that we needed to perform a cross section of it to be sure. A cross-section involves digging one half of a feature to see its soil profile in order to better understand the feature. We began our cross-section, and almost immediately found multiple pieces of animal bone. As we continued to dig down into our feature, we unearthed more animal bone, many pieces of charcoal, pieces of shell, and pottery sherds. It was not until completing the cross-section and chatting with the director of this field school, Dr. Goldstein, that we determined what this evidence meant. 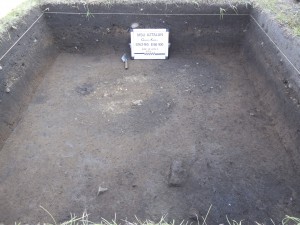